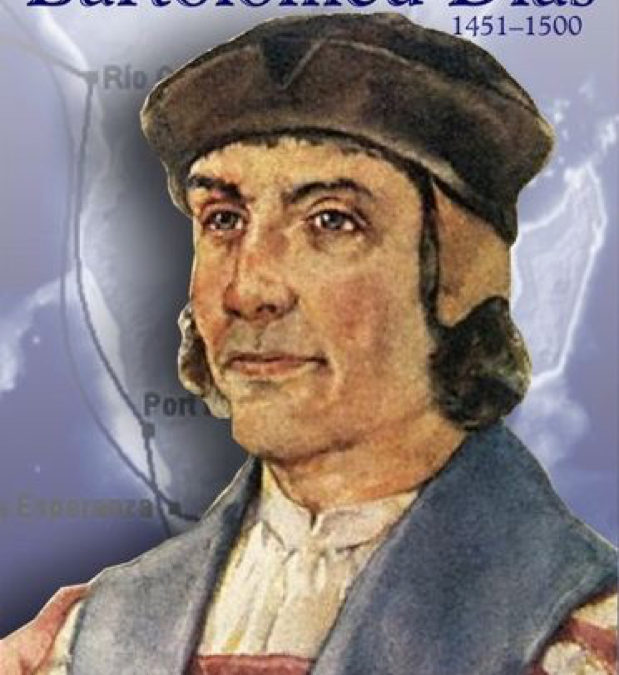 Bartholomew Dias was born in 1450 and was an experienced Portuguese navigator in the employ of King Joao II of Portugal who financed Dias’s expedition. Dias had previously taken part in expeditions down the west African coast in 1481. The search for a passage to the Indies was a pressing issue at the time, primarily for trade. The voyage of ˜discovery” started when Dias’s squadron of three ships departed from the River Tagus south of Lisbon in August 1487. The name of the flagship is unknown but Dias’s pilot was Pero de Alenquer. The second caravel was the São Pantaleão, commanded by João Infante and piloted by Alvaro Martins. Diogo Dias, Bartolomeuw’s brother, commanded a square rigged store ship. The pilot was

João de Santiago, who had previously accompanied Diogo Cão up the Congo River. The epic Dias voyage not only opened up the sea route to the Indies. It literally paved the way for contact between Europe, Africa, and the East, greatly extending the Portuguese sphere of trade and influence. He also discovered for Europe the south-east trade winds and the westerly winds to the west and south of South Africa, thus establishing the wind system for future sailors.

The early information about Dias’s voyage is limited because all of the actual records of his voyage were destroyed when the castle of São Jorge burnt down after the Lisbon earthquake of 1755. The history hasbeen reconstructed from chronicles written in the sixteenth century, from near-contemporary maps, and from the stone pillars or padrãos which the Portuguese explorers raised on headlands along the Africancoast during their voyages and from old rutters (sailing instructions). The route-book of Duarte Pacheco Pereira was of particular value in this regard. Pereira wrote the Esmeraldo de Sito Orbis, in which herecorded his own adventures on the Guinea coast. He wrote from direct experience because Dias rescued him in 1488 on his return voyage after the discovery of the Cape of Good Hope. Dias’s expedition also carried six Africans with them who had been taken to Portugal earlier by Diogo Cão.

The Africans were landed at various “ports of call” on the coast to explain to local chiefs that the Portuguese king wished to establish friendly relations and wanted them to know that they were seeking a way to India in order to trade. After departure from Portugal, the squadron called for supplies at São Jorge de Mina, the Portuguese fortress, on the Gold Coast. They later stopped on the coast of Angola, in December.

They sailed close to the coast beyond Cape Cross. It is thought that they anchored in Golfo da Conceicão (Walvis Bay) on the 8th December, 1487. They then sailed southward towards the Namaqualand coast and stopped at an inlet named Angra das Voltas (Luderitz). They transferred provisions and supplies from the store ship and left it at anchor with a caretaker crew of nine men. Continuing along the inhospitable coast, they sailed into Golfo de Santo Estevão (Elizabeth Bay). On 6 January, 1488, Dias named a range of mountains Serra dos Reis (the northern Cedarberg).

The squadron encountered adverse winds and after some days without sighting land, they unknowingly rounded the Cape of Good Hope late in January 1488. The expedition coasted along the southern Cape shores and arrived at the Gourits River estuary where they observed Khoikhoi tending wide-horned cattle.

They named the river, Rio dos Vacqueiros (River of the Cowherds, Vaca is a cow in Portuguese)). Early in February 1488 they carried on in an easterly direction close to the coast and realized they had rounded the tip of the African continent. They weighed anchor in a broad bay to replenish their water casks.

The bay was named Golfo de Sao Bras (Mossel Bay). They traded with the local inhabitants for fresh supplies were able to barter for cattle and sheep. The Khoikhoi grew distrustful of the sailors and attacked them. Dias shot one of one of the attackers with a crossbow and the others fled in terror. The crew then withdrew to their ships, and the expedition sailed on eastward to Bahia da Roca (Algoa Bay) where theyanchored in the lee of the largest of three rocky islets crowded with sea birds and seals. They raised a wooden cross and celebrated mass. They named the islet ilha da Cruz (Saint Croix Island)

They then proceeded eastwards along the coast and arrived at a river mouth, which Dias called Rio de Infante, after Joao Infante, the captain of the second ship. His crew now disgruntled compelled him to return to Portugal because they were exhausted, frightened and low on provisions. The turning point was originally thought to be the mouth of the Great Fish, but it is now thought to be the Keiskamma River at Hamburg, 50 km south-west of East London.

On 12th March, 1488, 3 kilometres to the west of the Bushman’s River mouth, they dropped anchor at a headland, formerly called False Islet, now known as Kwaaihoek. Dias erected his farthest stone pillar, the Padrão de São Gregorio (Professor Eric Axelson of the University of the Witwatesrand excavated fragments of this padrão in 1938) and then resumed his homeward journey.

Dias’s caravels anchored at Struisbaai Bay on 23 April, naming it Aguada de San Jorgy. They possibly recouped there for some time, renewing their supplies of fresh food. They passed Cape Agulhas on 16 May, but were unaware that it was the southern extremity of Africa, as all subsequent maps of the era indicate the Cape Point as being the southern tip of Africa. The caravels then sailed into Walker Bay (Hermanus). They sailed on parallel to the Cape Mountain ranges and rounded Cape Hangklip, entering False Bay, naming it Golfo dentro das Serras (the bay between the mountains).

Dias remained in False Bay for a few days and on 6th June, 1488 Dias erected a second cross, Padrão São Filipe (Saint Philip’s Day) at an unknown position on the Cape Peninsula. Legend has it, Dias called Cabo

Tormentosa, Cape of Storms, but it is named Cabo da Boa Esperanca in the records.

Dias sailed northward from the Cape of Good Hope. On St Christopher’s Day, 3rd July, 1488 he rejoined the store ship they had left behind at Luderitz Bay. Of the nine men who had remained behind, six had beenkilled in attacks by hostile Khoikhoi and of the three survivors who were very weak, one the purser, Fernao Colaco, apparently also died of joy at the sight of the returning ships.

The crew then destroyed the store ship by setting it on fire and Dias erected his last padrão to the west of the bay that he called Golfo de Sao Cristovão. Professor Axelson identified the original site on the foghorn knoll in 1953 and he recovered many fragments of the padrão at the foot of the hill and in the adjacent channel and shallows.

Dias probably put in at the mouth of the Congo. He certainly anchored at Principe Island in the Gulf of Guinea, where he rescued Pacheco Pereira and the survivors of an expedition, which had been sent to explore the waterways entering the Bight of Biafra. These explorers had fallen ill with fever and had lost their vessel after a fruitless search for a navigable route to the land of Prester John of Ethiopia.

Dias dropped anchor at the Tagus River in December, 1488 after a voyage of 16 months and 17 days, and having discovered 350 leagues of coastline unknown to Europeans. Christopher Columbus, who was present at the time, claimed Dias had sketched and wrote in a chart for the king of Portugal, league by league, the voyage he had just completed. The chart has since disappeared probably in the Lisbon fire.

Dias was on the return journey with the Brazilian expedition of Pedro Alvares Cabral, leaving on 2nd May, 1500. During the voyage on 24th May, while re-crossing the South Atlantic, a cyclone suddenly overwhelmed the fleet. Four ships were lost, including the caravel of Bartholomew Dias.