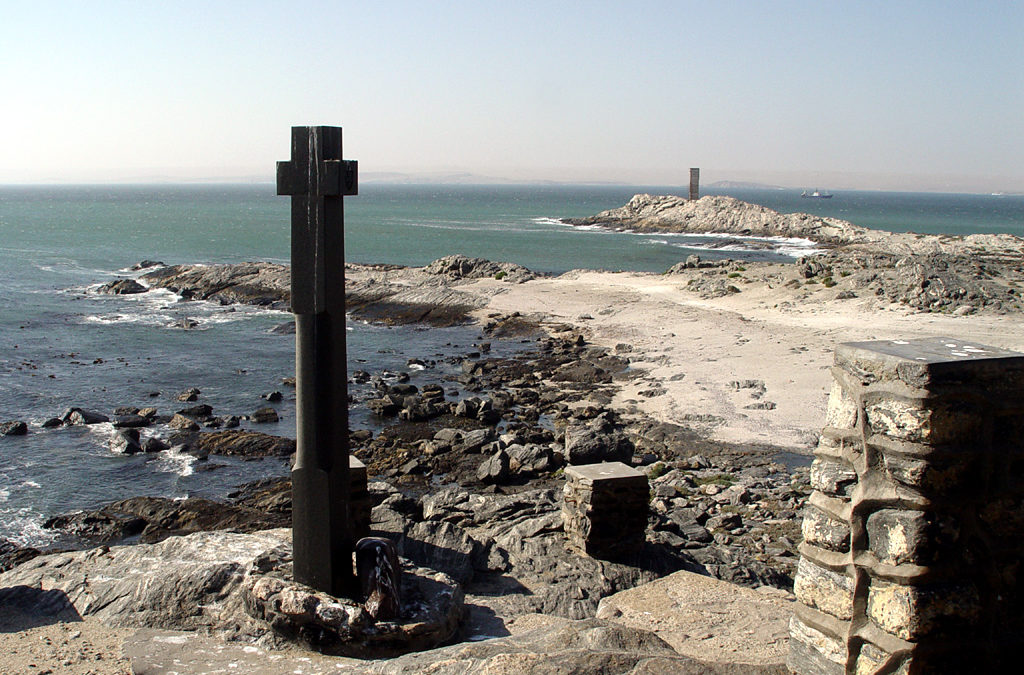 The Portuguese sailors planted many padrão or stone pillars along the coast during their “ports of call” in the 14th and 15th centauries. These padrão were sandstone pillars with the cross of the

Portuguese flag chiseled into the face to mark territory discovered by the early explorers. The cross at Kwaaihoek was planted by Bartholomew Dias on his epic voyage with a squadron of three ships, two caravels and a square rigged store ship, to seek out a passage to the Indies. The date of the erection of the padrão was on 12th March, 1488.

The padrão was not erected at the furthest point of the voyage, which was originally thought to be the Great Fish River, but is now thought to be the Kieskamma River mouth. Dias named the river Rio de Infante, after João Infante, the captain of the second caravel. The store ship had been left behind at Lueritz with 9 caretaker crew and only the two caravels sailed further south and east.

His crew, at that point, were disgruntled compelled him to return to Portugal because they were exhausted, frightened and low on provisions. They had been at sea for over six months and still had the return leg of the voyage to endure.

On the return journey he weighed anchor, 3 kilometres to the west of the Bushman’s River mouth, at a headland, formerly called False Islet, now known as Kwaaihoek. Dias erected his farthest stone pillar, the Padrão de São Gregorio (Saint Gregory), at this point before progressing on the homeward voyage.

The position of the Padrão de São Gregorio was unknown until Professor Eric Axelson of the University of the Witwatersrand, through diligent detective work, found the remains of the cross on an expedition financed by the University in December, 1937.

He used accounts of the early Portuguese voyages and calculations as to how far the sea had receded since 1488 to locate the remains of the sandstone cross. Some of the fragments were buried under sand but he recovered over 5,000 pieces and transported them back to Johannesburg. Enough was recovered to reconstruct the padrão. Two replicas of the cross were made from the reconstruction.

Several replicas of the Padrão de São Gregorio exist but the original in the William Cullen Library of the University of the Witwatersrand. One replica stands in the mayoral gardens in Port Elizabeth, another at the discovery site at Kwaaihoek. A cast of the replica is located at the Bushman’s River Mouth Town Hall. The cast was made and donated by Hugh Stanley Butt to the local Dias 500 year festival committee for the festivities at Kwaaihoek on the 12th March,1988.