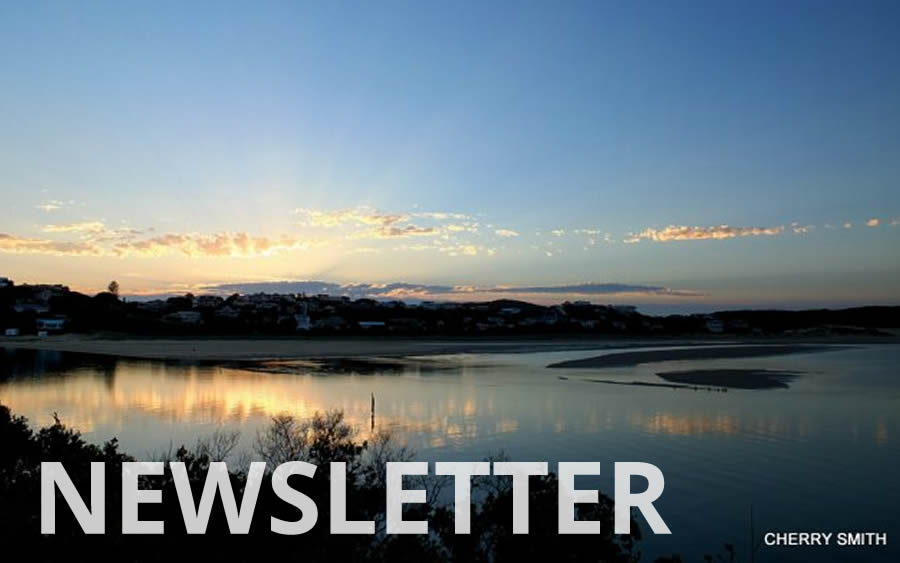 On behalf of the Bushman’s Ratepayers Organisation (BRRAG) we would like to take this opportunity to wish you all a belated Happy New Year from all of us who are involved with the ongoing maintenance of this beautiful place we call Bushman’s River Mouth.

The beginning of December 2018 was all about the preparation for the expected Christmas influx which took place this year with more cars, more boats, more people, and more dogs than we have seen in Bushman’s for some time. The beaches were in full swing, the slipway was alive and busy with both boaters and swimmers alike. Walking the beach to Kwaai Hoek was like travelling on the N2 – lots of foot traffic both ways. The tennis courts were well used throughout the holidays and the trailer park was used to the maximum.

Seeing in the New Year at the slipway beaches was busier than ever and the firework displays were quite spectacular from both sides of the Bushman’s River, with Bushman’s once again just edging the finale as we celebrated the dawn of another year. We hope that you all enjoyed your holidays and look forward to seeing you back here again in Bushman’s River Mouth to enjoy another fun and sun filled vacation.

News from the Chair

Unfortunately, we have to inform you all that our current Chairman John Wesley has, for personal reasons, resigned from the BRRAG Executive committee. We wish John and his family well, and would like to thank John for his tireless efforts whilst acting Chairman, for improving the security of the village and for attending to all the municipal matters such as the on-going poor service delivery.

Our new Chairman is Mike White who has taken over for 2019. Those who attended the AGM would have noted that there were no new volunteers to serve on the committee. The Chairman would like to remind members that BRRAG cannot continue to depend on the old stalwarts to go on forever and requests that all members who have an interest in keeping this village well maintained should seriously consider joining the committee which is now very short handed. Without some new volunteers in 2020 BRRAG will not be sustainable.

Our Seasonal fundraising began in early December with our Christmas Braai which, as usual, was fully subscribed and enjoyed by all. This was followed by our Christmas Craft Market which this year was held inside the Bushman’s Old Town Hall as well as beneath the tree covered frontage. It took a lot of hard work prior to the event, cutting back low foliage, overhanging branches, raking Bushman’s River Mouth Newsletter January 2019 and mowing, but it was well worth the effort and the end result was that it was the best attended Craft Market ever. The market was blessed with the best of the weather, with music, hot food and drinks by the braai and over forty stalls with such a variety of goods to choose from. It was a great day and a great fundraiser for Bushman’s Ratepayers.

Can I just say a huge thank you to all of you who purchased tickets and to those who sold those tickets on behalf of BRRAG. It helped raise much needed funds and to the winners I hope you enjoy your prizes. Congratulations to the prize winners who were as follows:

We also extend our appreciation and acknowledgement to the following non-committee members,
(the volunteers) who have unselfishly given up their time to maintain the village and to those who
at no cost have supplied us with pancakes, salads, desserts, scones, drinks, trailers, chainsaws
and much more throughout the year. Without these wonderful people we would not be able to do
what we do. So thank you to:

Great news. We are pleased to announce that the new security initiative that was put into place over the Christmas period (one of the busiest we have seen), resulted in Zero recorded crimes, apart from one petty theft by teenagers who were identified from the security camera footage and dealt with. The success of this initiative has been due both to the increased contributions received, which were just sufficient to cover the costs of the Christmas security arrangements, to the efforts of the security company and the BRRAG security team who monitored the situation during the holiday period.

As all of those who were in Bushmans and Riversbend over the December holidays are well aware, there is a severe water shortage at peak holiday periods when the available water supply is insufficient for the large, temporary increase in the local population. The Municipality are implementing the following remedial actions to alleviate the water shortages:

However, the reality is that, due to the on-going drought, local and national funding constraints, delays in environmental approvals and the high cost of the interventions required to solve the problems, the water shortage at holiday periods is unlikely to be resolved within the next few years. BRRAG would like to suggest that home owners who do not already have sufficient rain water storage capacity should install additional rain water tanks, especially if they are going to be resident over the December holiday period and still do not have any rain water storage capacity. This would go a long way towards alleviating both the water shortage situation and the level of frustration in the community.

This festive season saw our roads busier than ever and with that came impatience, rudeness and a complete lack of road sense. A number of people reported that they had close calls with oncoming traffic caused by dangerous overtaking on double solid lines and blind bends. Perhaps the drivers responsible should consider this the next time they come here on holiday. We want holiday makers to remember their holiday for all the right reasons, and road deaths aren’t one of them.

Pollution of the sea

Taking a nice leisurely walk to Kwaai Hoek my wife noticed a plastic bottle floating near the shore line. So doing our bit to save the ocean I went and retrieved said plastic bottle. It was only on the walk back to the carpark that I noticed where the plastic bottle originated. The label on the plastic bottle states that it came from, Mombasa in Kenya. (Port of Mombasa, Kenya to Port Elizabeth S.A. is a distance of 2,328 nautical miles.) Happily, it now resides in our recycling bin.

The modern take on the theme of the Three Monkeys.
“See no evil, hear no evil, speak no evil” each with its claws clamped over eyes, ears and mouth.
A fourth monkey is added, operating a smartphone.
“He is the sum of the first three. He sees nobody, hears no body, and speaks to nobody.”

After all the (alleged) corruption and looting that took place at the VBS Bank, I was amused to see and article in a Durban newspaper late last November that quoted Thomas Jefferson (US).

He said: “I BELIEVE that banking institutions are more dangerous to our liberties than standing
armies.”

A reminder to those members who have not yet paid their R 350 annual membership fee to please
do so.

(If your friends and neighbours are not yet members please encourage them to become a member.
The annual fee is negligible and it can be kept at this low level if enough people join BRRAG.)