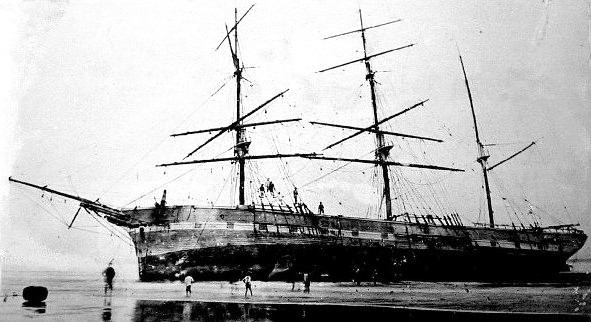 The Volo was a 500 ton Norwegian barque sailing ship built in Arendal, Norway in the 1880’s which was wrecked on the beach near Bushman’s River Mouth on the morning of 6th March, 1886. The home port of the Volo was Arendal and which was also the headquarters of the Norwegian merchant marine at the time.

The Volo was at sea for four months from the port of Goteborg, Sweden with a cargo of Baltic pine timber. The crew had not seen land since leaving the English Channel on the voyage towards Lourenco Marques. The master of the vessel, Captain Olsen, had made a “dead reckoning” that they were 200 miles south of land on the 5th March, 1886.

The fateful day was miserable with a strong easterly wind, known for mist and rough seas, proximal to the coast. The alert was called out by the look-out while the Volo was on a port tack: “Rocks on the port bow. Hard a-starboard”, but there was no response from the crew. The ship struck the rocks and was holed but carried over the reef and beached in the surf to the east of Kwaaihoek between Diaz Cross and the Bushman’s River Mouth.

Charles Butt, a local farmer and seafaring man was the first to sight the Volo from his house on the old Kenton-on Sea Hotel site. He could see the tops of the three masts above the mist. He summoned his coloured crew and launched his fishing boat from the mouth of the Bushman’s River but it was quickly overturned by the rough seas. He then traversed the beach in a westerly direction for approximately a kilometer towards Kwaaihoek. He found the Volo stranded with the sea breaking over the ship and the crew in the rigging.

He made several attempts to secure a line from the strickend vessel to the shore. On the third attempt, after two hours in the chilly water, he managed to persuade the crew to cast a line from the bowsprit with which he struggled to shore. This was no mean feat for a man already in his 60’s. The rope in place and a small crowd on the beach all 12 crewmen were landed safely on shore.

The story goes that at the same time of Butt’s struggle in the surf another rescue attempt was being made by “Kaaljan” Scheepers, an Alexandria farmer. “Die tweede Wolraad Woltemade” rode into the sea on his steed “Tempest” in attempt to bring a line ashore. There is still a bit of controversy as to who brought the line ashore but Butt is quoted as saying in the Grahamstown Journal that “He didn’t know as much about the currents as I did and wisely gave up the attempt.” The Butts took charge and settled the crew on the beach and then provided temporary shelter for them at their farm house. Charles Butt, on the recommendation of the magistrate of Bathurst, was awarded a silver medal by the Royal Society in London for his bravery. A copy of the accompanying certificate is at Stanley’s restaurant, the Butts old farmstead, Eve’s Retreat. In addition Charles Butt was rewarded with half the cargo of the Volo which he put to good use in building a new farmhouse at the old Kenton Hotel site.

The pictures of the wreck at various stages of decay survive because some one had a loaded camera at the scene. Parts of the wreck are still to be seen in the area. The anchor is stationed outside the Bushman’s River town hall, pieces of the wreck and anchor gears are exposed along the beach towards Kwaaihoek and a large piece to the wreck is submerged in the mouth of the

Bushman’s River. Local farmers also used parts of the wreck to improve their sea side cottages. Part of the cargo was bought by a Mr.Stocks of Grahamstown and wagoned there where it was used to build the roof of Hobson House at Kingswood College. An artifact, the ships signal gun is also to be seen at Stanley’s Restaurant.

On Monday 28 August 2017, we had some massive waves and high winds which gave us a priceless finding, parts of The Volo appeared on the beach. 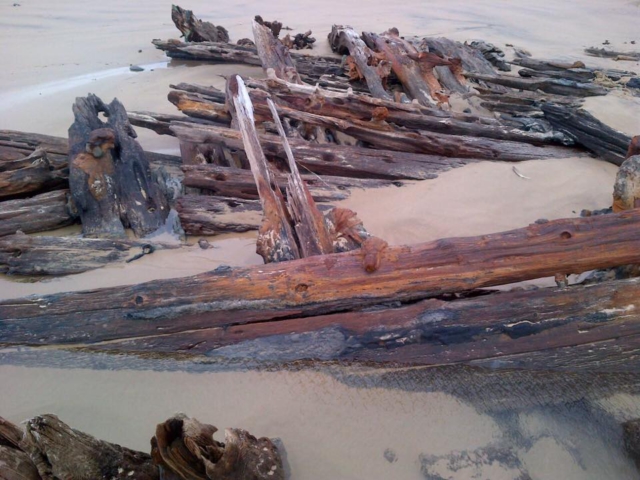 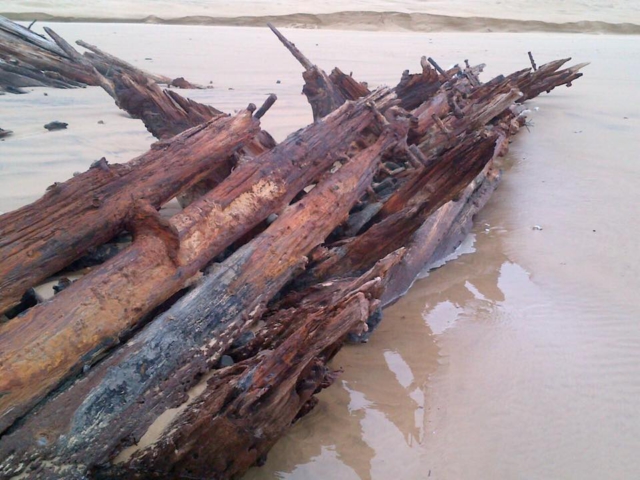 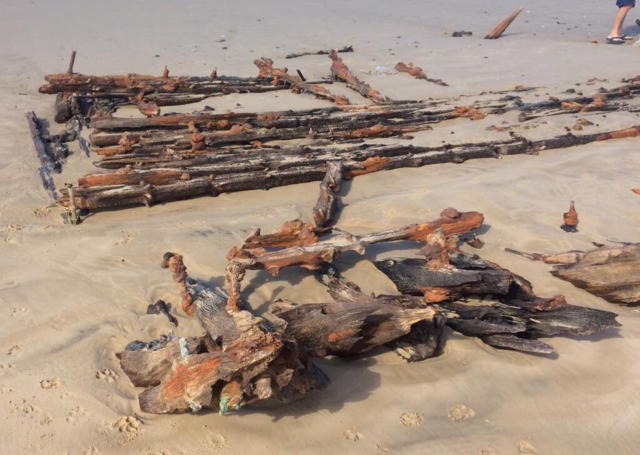 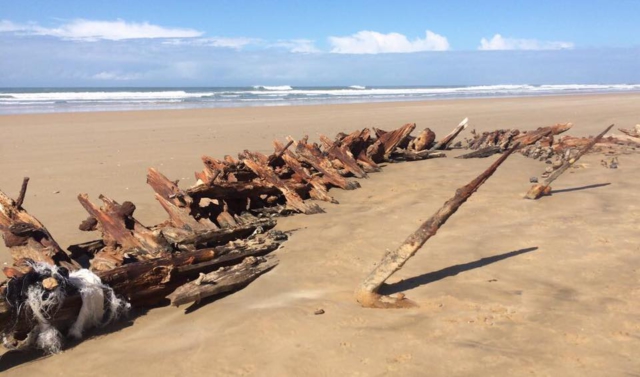 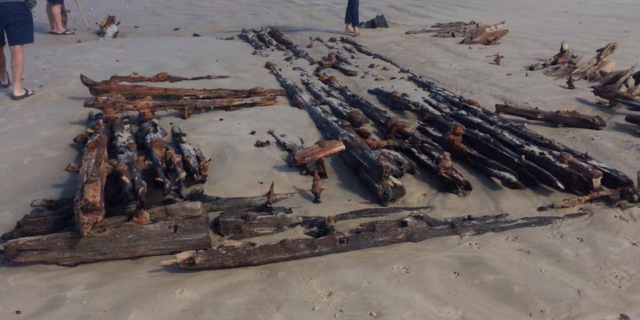 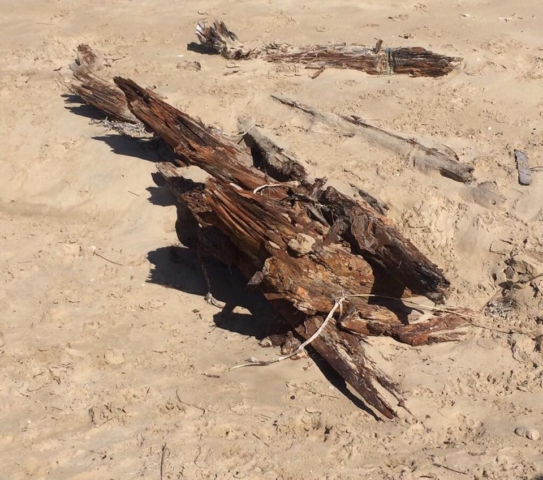